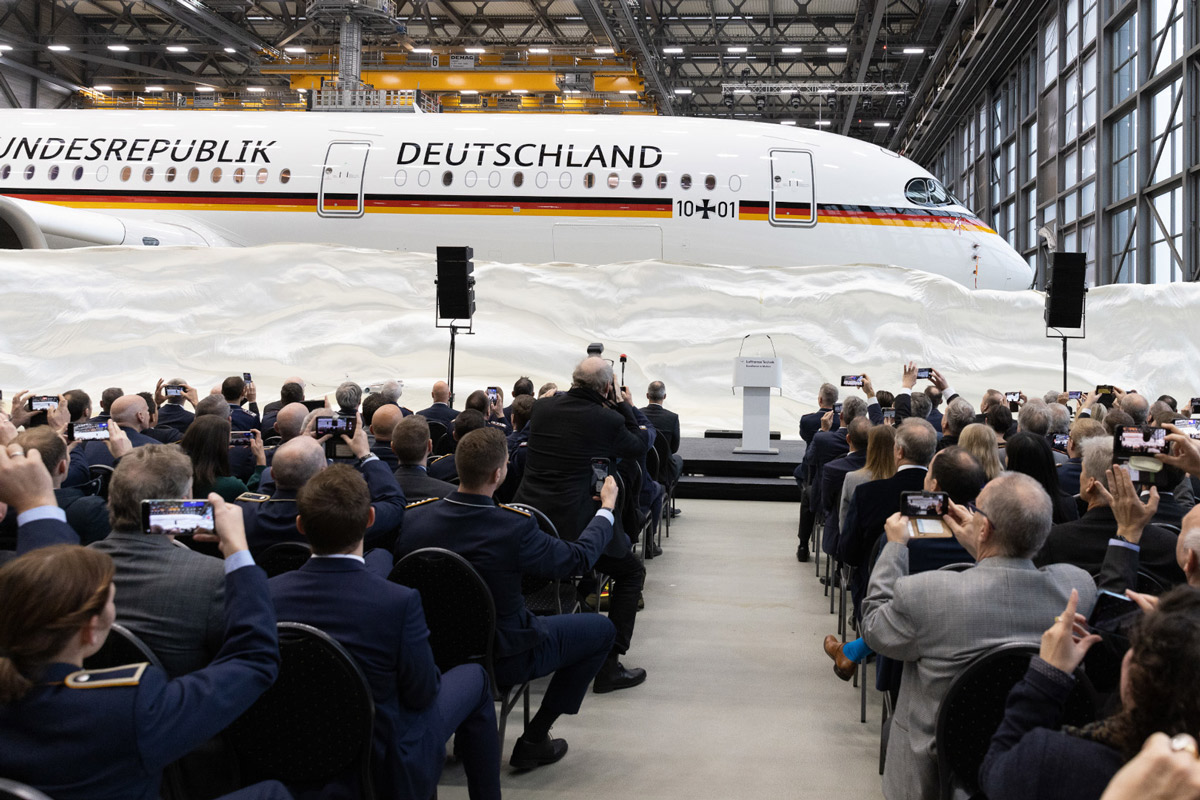 It is equipped for the first time with a full government cabin. Siemtje Moeller (SPD), Parliamentary State Secretary at the German Ministry of Defense, ceremoniously christened the aircraft in the name of former Federal Chancellor "Konrad Adenauer", in the presence of his grandson of the same name.

The Airbus A350 christened today arrived factory-fresh at Lufthansa Technik at the end of March 2021 and has since undergone an extensive modification program at the company's competence center for Special Aircraft Services in Hamburg. The main focus was on the fitting of the full government cabin, which differs significantly from the transitional cabin of the 10+03 "Kurt Schumacher", the world's first VIP and government aircraft based on an Airbus A350, which was already delivered in 2020.

In contrast to the latter's open cabin design, the various functional areas for political-parliamentary flight operations are now structurally separated from one another, as was already the case with its two predecessors based on the Airbus A340. The remaining space in the cabin is available for the delegations traveling with the aircraft. It features seating with generous spacing, an appropriate number of washrooms and modern galley equipment.

Clearly visible to the public is the discreetly revised livery of the 10+01, which also differs in detail from its sister aircraft 10+03. It includes new lettering in the "Bundes Sans" font as well as wingtips whose outside is now fully painted in black, red and gold, the German national colors.

"Ceremonial handovers of new aircraft to the German Armed Forces have already become a fine tradition for us in recent years. Nevertheless, today is again something special," explained Soeren Stark, CEO of Lufthansa Technik. "The aircraft christened today is not the first Airbus A350 handed over by us to the German Armed Forces, yet it bears all the insignia of a new flagship with the registration number 10+01 and the history-steeped name Konrad Adenauer. This great honor is also reflected in the new government cabin we installed, which sets new standards with state-of-the-art technology and high functionality as well as cost efficiency."

Following the formal handover today, the 10+01 will be transferred to Cologne as early as tomorrow for subsequent entry into service with the German Air Force. The third Airbus A350 with the registration 10+02 and the future name "Theodor Heuss" is also at Lufthansa Technik's Hamburg base and in an advanced stage of full cabin modification. The 10+03, which is already in service, will also soon return to Lufthansa Technik to be converted from the transitional to the full government cabin.