January has brought increasingly bad news to the aviation industry, and the emphasis on border control is going to stifle even the most resilient business aviation operators

Business aviation aircraft have operated 268,000 sectors so far in 2021, just 6% off the comparable flight activity in January 2020, according to WINGX`s weekly Global Market Tracker, published today. This activity was 19% of all fixed wing flights globally so far this month, with 71% of activity coming from scheduled airlines, which is trending down 48% compared to last year. Under the pressure of renewed travel restrictions, the last week has seen a slump in all activity, airline activity down 53%, business aviation traffic now also sliding towards 23% below normal. Over the same week, the scheduled and ad hoc cargo market is flying 24% more than in January 2020.

This month’s trend for business jet and prop traffic is most resilient in Asia and North America, and weakest in Europe. North America flight trends are down only 5% so far this year, 4% decline in the United States. 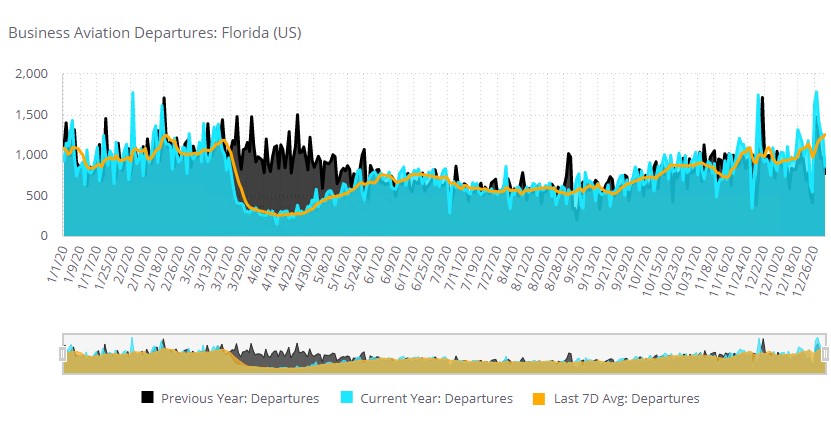 Branded charter operators continue to buoy the market in the US, flight operations down just 1% , with companies like XO, Jet Linx and FlexJet posting strong growth for January. Aircraft Management companies have flown more sectors in January 2021 than same month 2020. But almost all of the growth effect came in the New Year holiday; as virus restrictions return in the last two weeks, Charter and Managed operations have double digit declines.

There are still some routes with robust activity, with connections from the US to Mexico well up, and flights outbound to numerous destinations in the Caribbean showing healthy year over year growth even in the last week. Increased departures are showing up mainly at Florida airports like Opa-Locka Miami and Naples. Dallas Love Field and San Antonio International have also seen increased movements in the last week.

Over in Europe, lockdowns are taking their toll, with the last week seeing a 27% dip in business aviation activity, the biggest YOY decline since June last year. Scheduled airline activity has slumped by a mammoth 75% in the last week. Cargo traffic has picked up 18% in the same period. For business jet traffic, Russia, Turkey, Greece, and Ukraine have more departures than last year, indeed Russia is the 3rd busiest country in Europe in the last 7 days.

The United Kingdom is ranked 7th, behind Spain, with just 400 business jet flights this week, almost all domestic, with activity down by 71% YOY. With no alpine season, business jet traffic in Switzerland is down almost 60%. For the whole month, Le Bourget is narrowly the busiest airports with declines of 40% compared to January 2020. Next busiest airport is Vnukovo with an increase of 8% in departures compared to last year.

Outside Europe and the US, the busiest airport in the world is Vancouver, with 6% more traffic than last year, although the growth is all coming from prop traffic. For business jet flights, Toluca is the number 1 airport, 22% fewer departures than January 2020. In contrast. Al Maktoum airport is seeing more than double the private jet traffic it normally does at this time of year. Business jet departures are up this month from China and Brazil. Flight activity to and from the Maldives is up 200% even in the most recent week. Saudi Arabia is seeing more than 20% declines this month, flight departures from Morocco down 37%. But overall, flight hours in Africa are down just 5% this month.

Managing Director WINGX Richard Koe comments “January has brought increasingly bad news to the aviation industry, and the emphasis on border control is going to stifle even the most resilient business aviation operators. With Brexit confusion to add, the UK is feeling this more than any other market, with flights activity now tumbling to its lowest point since the pandemic last Spring. The US market is also slowing, but with a much larger internal geography, business aviation activity looks more resistant to this winter.”