January got weaker as the month went on, with the last week seeing demand lurch towards declines from early summer last year

Overall Comment: January got weaker as the month went on, with the last week seeing demand lurch towards declines from early summer last year. Evidently demand is being suppressed by travel restrictions, with the relatively unfettered US market seeing most resilient demand, and Florida continuing to see record activity. The last few months’ busy pre-owned business jet transactions market suggests that once lockdowns are lifted more widely, there could be pent-up demand from lots of new aircraft owners.

Just under 50,000 fixed wing aircraft were active in January 2021, with 23,000 business jets in operation, flying 322,000 sectors, 18% of the total traffic and down by only 9% compared to January 2020. This is a far stronger trend than for the scheduled airlines, with passenger sectors down by 50% for the first month of the year. Ad hoc and scheduled cargo operations continue to exceed pre-pandemic levels, with an increase of 16% in flights hours for January. The resilience of business aviation has started to erode in the last couple of weeks, as travel restrictions bite. For the week through 2nd February, business aviation activity is down 16% YOY, commercial airlines slipping back 55% YOY.

The North America market has stood up well in January 2021, with the US the key market, 7% down in terms of flight activity compared to January 2020. The year-on-year trend for the full month has been flattered by the New Year holidays, with early January seeing more than 8,000 departures a day, a high point which has occurred only four times since the pandemic. The Branded Charter operators have done best, operating within 3% of normality in terms of sectors, and 3% more than normal for flight hours. The market deteriorated in the 2nd half of January, with activity down by 14% in the most recent week, although Charter operations are still within 10% of normal. 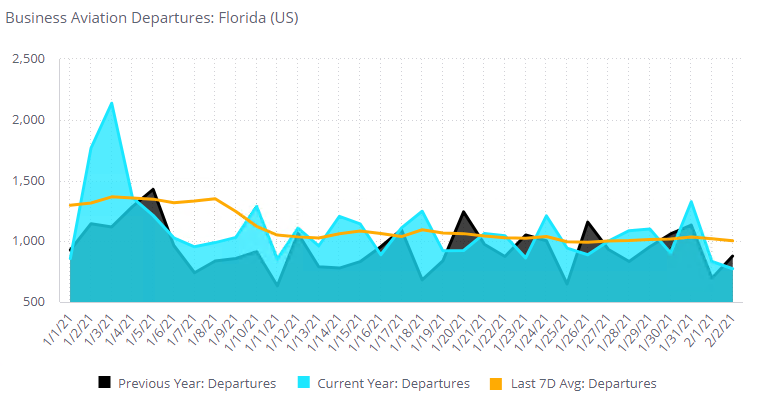 Florida remains the busiest hub for business aviation globally, with 30% more departures than Texas in January. In the last week, as most of the country has relocked down, Florida’s relatively openness is reflected in an 8% increase in YOY flight operations. The key locations are Palm Beach, Miami-Opa Locka and Naples, all with 30% increase in YOY business jet and prop departures. Fort Lauderdale is relatively laggard with only 16% growth. Ultra-Long Range and Heavy Jet traffic is down, but only by 5%, with the main gains in the light jet segments. Branded Charter operations are up by 18% in the last week from the Sunshine State, Private flights up more than 10%. The busiest pairs are intra-State, but fastest growing connections are with New York, Georgia, Texas and Illinois.

In Europe, the proliferation of border restrictions is reflected in fast-tapering flight activity, down by a quarter for January, but slumping by almost 30% in the most recent week. The UK continues to be the deadweight, flight activity down by 55%, with no airports ranking in Europe’s busiest 10 airports, and flights out of Luton and Farnborough down by more than two thirds in the last week. Not all Europe is seeing declines, with flight activity from and within Russia and Turkey still higher than year on year. Scandinavian and Eastern European countries are seeing quite robust activity, with more activity than ever through Latvia, Hungary, Iceland. The growing complexity imposed on UK registered aircraft may be reflected in growth in flight activity out of Malta, up by 25% in the last week.

The light and midsize categories continue to see more robust activity in Europe, with heavy and long-range idle. Turboprop operations are resilient, with King Air 200 activity down just 2%. The Hawker 700-950 platform is an outlier, with sectors up by 11% on this fleet in the last week. Much of this activity is coming out of Russia – St Petersburg and Moscow – and Turkey, also from Larnaca in Cyprus. Unsurprisingly, international traffic is being most affected by this lockdown, with cross-border flights down by more than half. Some markets are seeing more domestic travel than ever before: Russia, Turkey, also Spain and Italy. The busiest international connection is France to Switzerland, 30% fewer flights in the last week. Interestingly, flights from Spain to Switzerland are up by one quarter.

The market outside Europe and the United States is relatively robust. For the full month, flights are down only 4% compared to January 2020.  From and within Australia, Brazil, China, New Zealand, and Colombia, there has been double-digit growth this month. The United Arab Emirates has seen 75% increase in business jet movements in January. Large jets flew 38% of all activity, with the Challenger 600 platform on par with January last year, the Global Express platform flying 30% less, the Embraer Legacy 50% more active than last year. The last week has seen weaker trends, operations down by 16%, although government flights are up YOY. This is true in Nigeria, with business jets flying hybrid shuttles between Lagos and Abuja.