Business jet activity continues to grow well into the winter period in the US and Europe, which is a strong endorsement of sustained demand. The opening up of transatlantic connections this month should boost activity further. On the downside, the high visibility of business jet usage at COP26 is getting negative headlines. The bizav industry will be nervous of any repeat of the decade-long toxic optics which appeared to follow Obama’s criticism of the auto executives’ use of private jets back in 2008.

Global business jet activity posted a new record, as expected, for sectors flown in the month of October. Compared to the previous record, posted in October 2019, business jet sectors were up 19% worldwide, and eclipsed October 2020 activity by 45%. Demand for business aviation continues to be boosted by the erosion in commercial aviation, with airline traffic trailing 28% behind October 2019. Business jet light hours were up even more, 19% above October 2019, which underlines the rebound in larger cabin aircraft and longer-sectors. 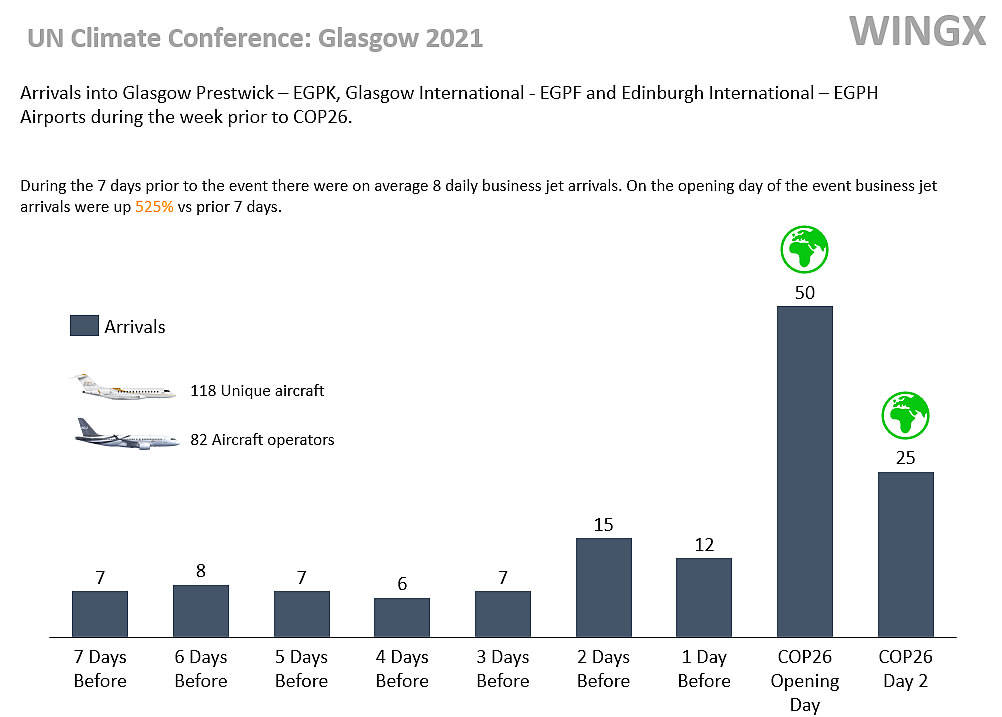 You can read our COP26 analysis here.

Business aviation activity in the US, including turboprops, is up 2% on 2019 through October, up 5% for just business jet sectors. That trend will surely extend to a record breaking total for 2021, as October full-month trends show a 12% growth on October 2019 (which was the busiest month since 2008). Commercial aviation is recovering relatively fast in the US, with network schedules down “only” 18% in October. Charter and Fractional operators are driving the growth, with fleet activity 30% up on October 2019. Super midsize jets account for over 20% of all the traffic in October, with sectors 26% higher than corresponding October 2019. Teterboro, Boston and Dulles are three of the only airports which did not have more traffic in October than two years before. Much of the deficit is in international flights; transatlantic business jet connections from the US are running 32% behind 2019 year-to-date.

Outside the US and Europe, business jet demand has stuttered in the 4th quarter of the year. Having been well ahead of 2019 trends in the Spring and Summer, sectors flown were up just 4% in October. Recoveries in Canada and Mexico appear to have stalled, sectors still 20% below normal. Business jet sectors in China are slightly up on 2019, although down on October 2020, and flight hours are well below two years ago. Business jet activity in Australia has fallen below 2019 levels, and flight activity in Saudi Arabia has not yet fully recovered since 2020. In contrast, business jet activity in Qatar and UAE is well above 2019 for October. Several countries in Africa have seen strong growth in business jet activity throughout this year, continuing in October, notably South Africa and Nigeria.