ALTEA knows aircraft inside and out. The organisation is retained by those who want fresh thinking secured by experience in asset management; procurement and sales; financial solutions and design.

Team members, Jean Sémiramoth and Robin Dunlop share their personal retrospective views on the business aviation sector in 2021 – a year that saw unprecedented demand for pre-owned aircraft – and look ahead to 2022 to see what innovations in terms of aircraft, design and passenger experience we can expect to see.

“If we consider pre-owned aircraft the numbers speak for themselves” says Sémiramoth. “Early January 2021 there were approximately 1,700 preowned business jets and 960 preowned turboprop aircraft for sale on the open market. Less than 12 months later these have shrunk to less than 920 and 640 respectively – hitting new historical low levels.”

According to ALTEA it is clearly a seller’s market and this is not anticipated to change until the second half of 2022. And then there is the uptick in prices. “What a major paradigm shift in less than a year” he adds. “List prices across the board are now back to – and in some cases above – their pre-pandemic levels.” 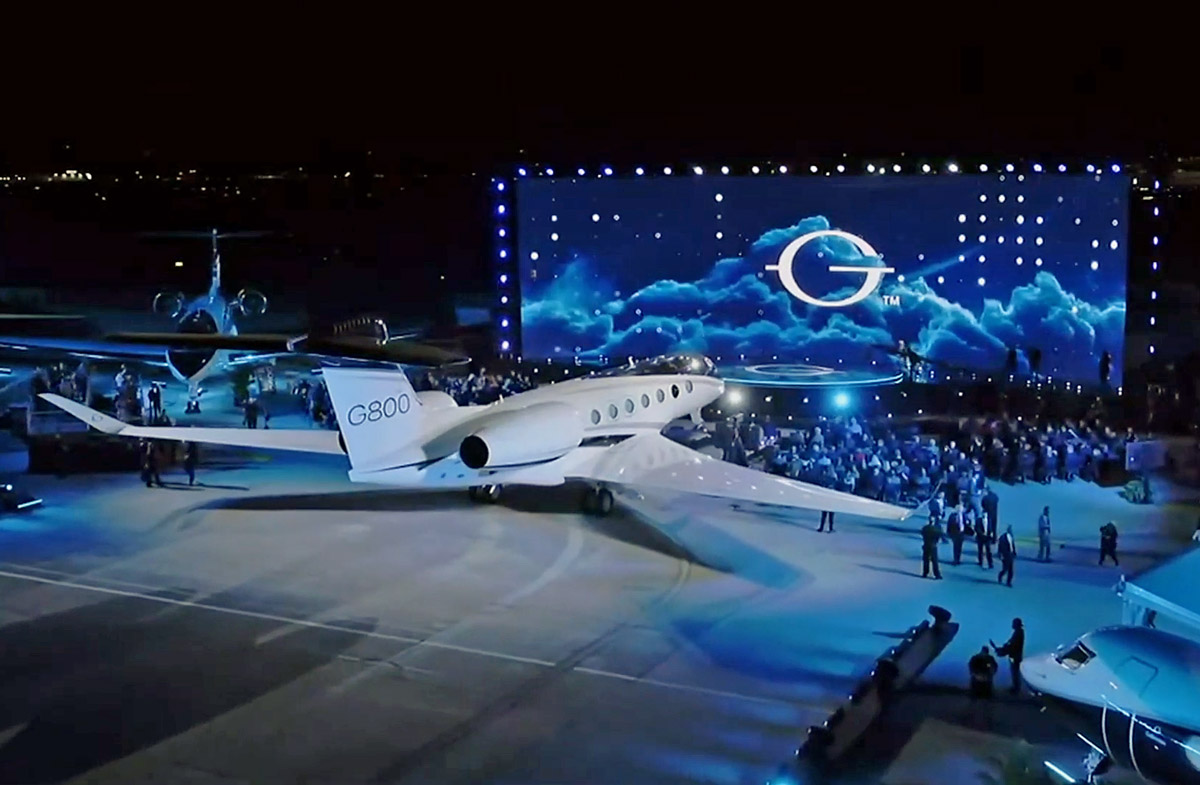 Turning to new business aircraft Sémiramoth points to a vibrant market with OEMs revealing new long-range models and greater comfort. “Bombardier may have dreamt it; but Gulfstream have made it. Whilst Bombardier reportedly continues to study the development of the 8,000 nm range Global 8000, and needs a clean-sheet design to replace the 4,000 nm range Challenger 650, Gulfstream stole the show last October with the unveiling of the 8,000 nm range G800 and the launch of the 4,200 nm range G400.”

By 2025, in just seven years, Gulfstream will have certified and put into service no less than five new models: the G500, G600, G700, G800 and G400. Dassault’s launch of the 7,500 nm range Falcon 10X was maybe a bit less spectacular than Gulfstream’s unveiling of the G800 but the Falcon 10X is certainly no less impressive.

Sémiramoth goes on to say, “The Falcon 10X simply aims at redefining standards in the ultra-long-range business jet arena with the widest cabin in the segment and a myriad of innovative features such as an auto-recovery mode, a smart throttle as the primary power control, dual head-up displays certified as primary flight displays and pilot seats with full-recline capability to enable single-pilot operation in cruise. Meanwhile, the Beechcraft Denali, the Falcon 6X and the ACJ TwoTwenty all made their first flights in 2021, paving the way for their entry into service between 2022 and 2023.”

But are the light to super mid-size jets the next aircraft types to watch?

As ALTEA observes, Bombardier unveiled the Challenger 3500, a revamp of the Challenger 350, whilst Textron introduced upgrades to the Citation M2, XLS+ and CJ4 dubbed the M2 Gen2, XLS Gen2 and CJ4 Gen2. But who will trigger first with the launch of an original design in either of these categories? Surprisingly, the first move may come from HondaJet who unveiled its concept for a transcontinental light jet, the HondaJet 2600. Textron may also surprise the industry with something entirely new in a near future.

Bombardier is unlikely to announce an entirely new platform in these categories as it continues its efforts to de-leverage its balance sheet. And Embraer may simply have another priority with the – much awaited – launch of a new large regional turboprop aircraft expected before the end of 2022.

On the completions and design front 2021 saw an active market despite supply chain issues says Robin Dunlop Design Partner at ALTEA. “To some extent the pandemic has led to increased MRO activities with the storage of aircraft and owners taking advantage of the downturn in flying to bring bigger maintenance checks forward.”

In the run up to Christmas, Jet Aviation announced the on-time redelivery of its first VVIP Boeing BBJ 787-8interior completion to an undisclosed customer. The aircraft is notable for its low weight and low cabin acoustic values and it would seem Jet Aviation have made some gains to further enhance the cabin’s acoustic calm. “This aircraft was delivered green to Jet Aviation’s completions centre in Basel in October 2019 so it was a two-year project for them – no doubt due to some pandemic impacts. Not to be outdone by its neighbour on the Basel airfield, AMAC Aerospace have completed multiple maintenance projects this past year on VIP aircraft from Boeing BBJ 737s to ACJ320neos not to mention a plethora of Bombardiers and Gulfstreams notably mid-size models to fill AMAC’s new Hangar 5 facility.”

Design concepts continue to inspire. Lufthansa Technik raised awareness of their Airbus A350 prowess by utilising their in-house design team to come up with several interesting design concepts for ACJ350s (or presumably similar sized wide body aircraft). “These concepts could be construed as ‘figments of the imagination’ and quite often send engineers into a tailspin, however they are thought provoking and allow potential customers some insight into the possibilities of cabin interior design” enthuses Dunlop. “All too many VVIP cabins go from one extreme (neutral, safe, inoffensive) to the other (over-indulgent, gaudy, idiosyncratic) – so guiding a client’s vision can be a minefield. Such concepts subtly steer potential customers in a more exciting, tasteful direction.”

Moving back to stateside Comlux Completion goes from strength to strength, having announced it would be Airbus ACJ’s completion centre of choice for the ACJ TwoTwenty programme back in late 2020, with a potential pipeline of 15 ACJ TwoTwentys. The first green aircraft has arrived for outfitting at Comlux’s US based facility in Indianapolis. The world’s first ACJ Two Twenty will be re-delivered with its new VIP interior to, FIVE Hotels Group based in Dubai, UAE which is anticipated early 2023.

“This is a bit of a landmark aircraft for the business aviation sector as it creates its own niche, bigger, and thus arguably more comfortable than a traditional long range business jet, yet more affordable and as capable as a narrow body bizliner. No doubt this ‘new-style’ VIP aircraft will have much appeal in the launch customers’ region.” 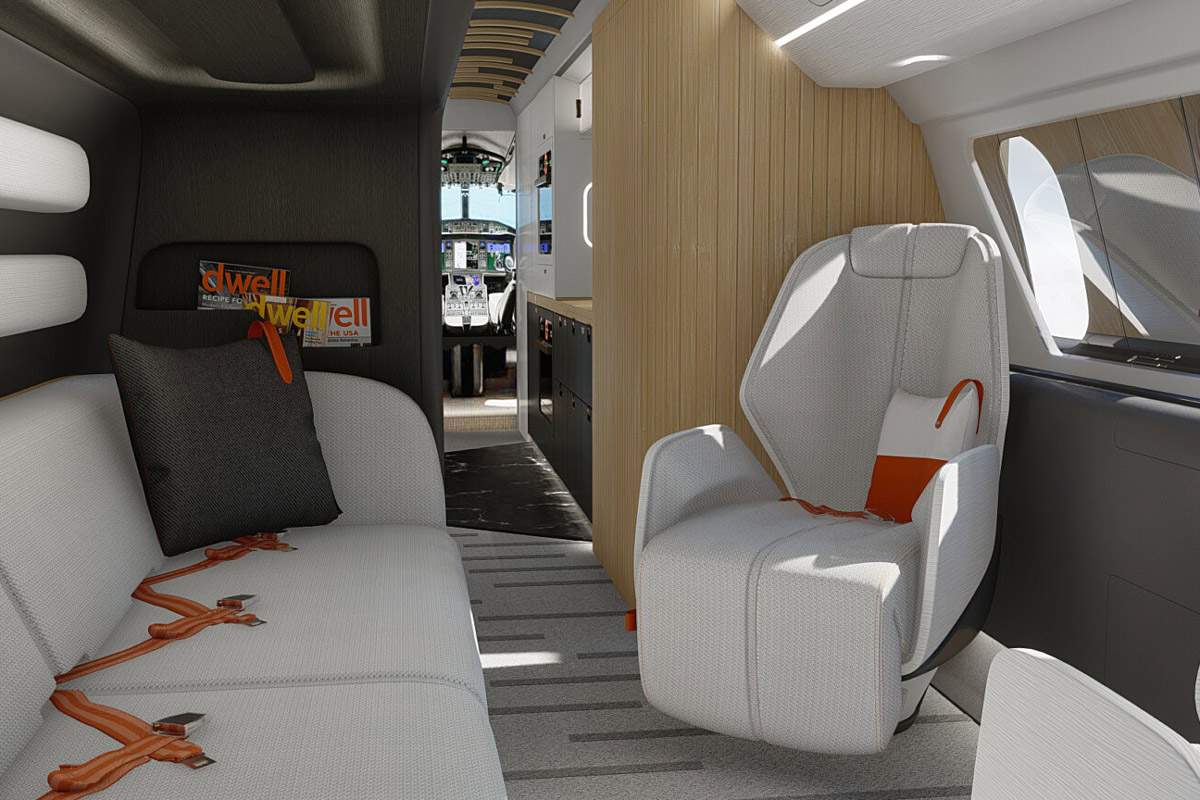 Back at ALTEA’s London HQ and design studio, the ALTEA design team unveiled a custom Global 7500 interior in the Autumn and jumped in with Bombardier on their Global 7500 tour meeting up with the aircraft and potential customers in Stockholm. “As aircraft interiors seek to become more ‘things’ to their owners, ALTEA believes the simplicity and good practice of the industrial design process will be key to future interior schemes especially as the private jet ownership becomes more accessible to younger aircraft owners who bring a natural awareness towards more design-savvy requirements” says Dunlop.

He goes on to comment that ALTEA is also investigating the eVTOL market and what implications urban mobility will have on business aviation, design trends and aircraft ownership. “This niche area of innovation seems awash with investors keen to take a punt on what ‘vehicle’ or technology will become the mainstay for the future. The truth is that it will be slower than people want, and no doubt a hybrid of several innovations and alternative power sources. In the immediate future sustainable aircraft fuel will play a bigger part in the aviation industry than perhaps many first thought.”

The outlook for design and completion in 2022 in ALTEA’s view will undoubtedly continue to grow so long as the aircraft are there to convert. However, one area which may be of particular interest to watch is the increase in luxury hotel and ‘air-cruising’ market. Such markets can utilise an array of aircraft platforms from older wide bodies such as Boeing 767’s to re-positioning and re-configuring aircraft previously thought as regional jets – Embraer E2 for example, to create a niche between a First-Class airline experience and private jet charter.