The Super Bowl in Inglewood this year attracted 25% more business jet arrivals than when the event was held in Atlanta back in 2019. This was double the still-positive growth trend in flight activity in the US as a whole and in Europe. So far in 2022, broader macroeconomic instability does not seem to be slowing demand to fly private. 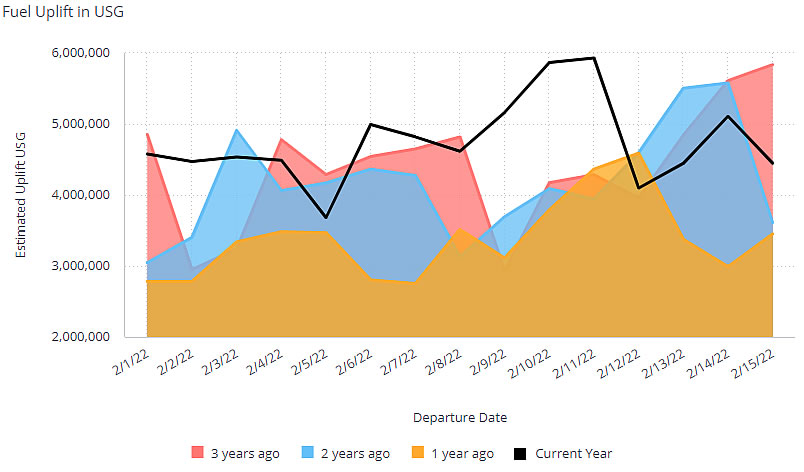 The United States saw its premier event for attracting business aviation traffic last weekend, with airports near SoFi Stadium in Inglewood getting the predictable influx of fans arriving by private jet. Arrivals peaked at 501 flights on 11th February, with departures on the day after the event seeing548 business departures on 14th February. Activity far exceeded arrivals in 2021 and 2020, although the traffic did not get close to the record levels around the same event in 2017, 2018 and 2019, when departures the day after the Super Bowl exceeded 600 flights. Compared to normal activity in February at Inglewood airports, the event drew a 65% increase in activity. The record boost in activity was back in 2011, when Arlington, Texas hosted LXV and attracted a ten-times increase in normal bizjet traffic. 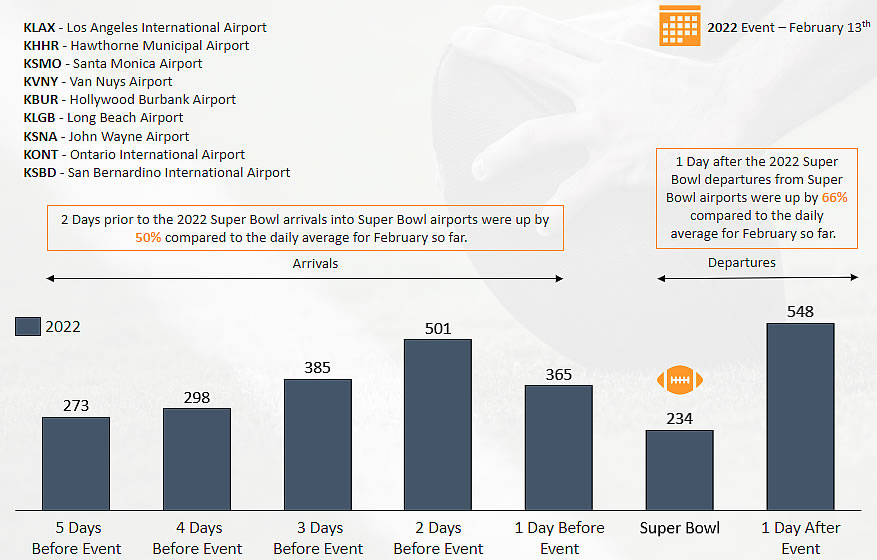 Overall, business jet demand across the United States is 12% ahead of where it was in February 2019, so far this month. Fractional Operators are setting the pace, flying 13% more sectors than 3 years ago. Branded Charter operators have flown 16,000 sectors this month, up 7% on February 2019. Private flight activity is stronger than it’s ever been before, 16% higher than two years ago. The Turboprop segment, in contrast, is seeing slower demand than in 2019, down 7%. Across the country, the lighter aircraft are seeing most growth, flights up almost 20%. Ultra-Long Range jets are on the comeback, with 77% more activity than February 2021, 16% more activity than three years ago.

As virus restrictions are lifted in Europe at an increasing pace, business aviation has continued to flourish, with sectors up 12% on where they were back in February 2019. France is the key market, with 15% increase on sectors three years ago. The UK has seen a 184% increase in business jet traffic compared to February 2021, an indicator of how far it was depressed last winter; compared to February 2019, UK traffic is up 6%. Business jet traffic is running at 20%; 30% and 40% ahead of the 2019 norm in Switzerland, Italy and Spain. Germany has 40% more business jet travel than February last year, but 4% less than in February 2019. Austria, Netherlands, Sweden, Norway, are other countries where there is some deficit on pre-pandemic 2019.

Rest of the World

Outside the US and European area, business jet traffic has also continued to run hot compared to previous years, with an aggregate growth trend of 14% above comparable activity in February 2019. Canada, Mexico, and China are three of the larger markets where demand is still sub-normal. This has been offset with highest ever business jet activity in Australia, New Zealand, Brazil, Colombia, India and UAE. The latter has been resilient throughout the pandemic, with Heavy Jet demand characterizing the activity, most conspicuously the Legacy 600. The Gulfstream G600/650 has flown double the flights from UAE this month than 3 years ago. The two most popular destinations are Riyadh and Moscow.