Easter week traffic was record-breaking but is also showing signs of slowdown consistent with increasing concerns for the global economy. Europe has a bigger exposure to the spillover from the Ukraine crisis, with Germany seeing significant slowdown in flight activity. The US is still a very robust market, with Florida seeing runaway bizjet traffic.

The war in Ukraine continues to sap business aviation aircraft activity in the region. Most obviously, business jet flights out of Russia, Belarus and Ukraine are just a fraction of what they were a year ago, with 500 departures so far this month, down 70% on April 2021. In the last week, just 200 departures have been operated from the region, of which 10% went to destinations in UAE and Turkey, the vast majority operating within Russia. Germany is the closest large market to see an impact from the crisis, with business jet demand falling 15% this month vs April 2019. Other European countries now also showing deficits include Austria, Luxembourg, Finland, Slovakia, Lithuania. Notably Estonia and Montenegro have big increases in business jet activity this month. 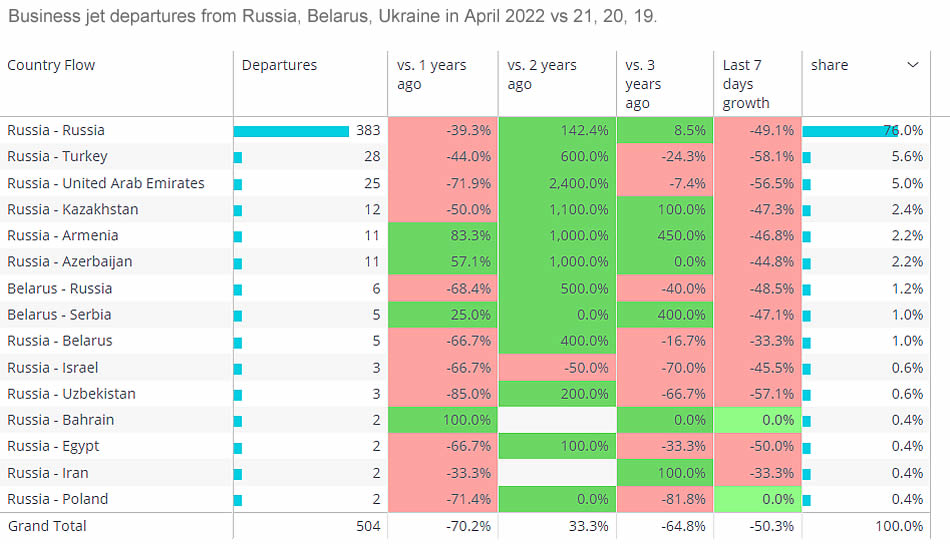 Russia now ranks outside the top 10 business jet markets in Europe, having ranked in the top 5 at the start of the year. Excluding Russia, the European region still has healthy trend in business jet demand this month, up 9% compared to April 2019, as scheduled airline activity continues to wallow 25% below where it was three years ago (notwithstanding almost 200% increase in April this year compared to April last year). The Easter break saw strong demand across several countries; in the last 7 days, business jet departures from the UK were up by 13% compared to 2019, up 20% from Spain, up 45% from Turkey. But the region’s overall growth is slowing, with a gain of just 3% in the last week vs 2019. Flights within Germany during the Easter week actually fell 21% vs 2019. France to UK was the busiest international connection this week, flights up 33% compared to April 2019.

Private and Corporate flight departments are getting the biggest rebound in activity this month in Europe. Fractional customers are also flying much more. The Charter market is weakening, though still a little above 2019 levels. Easter week saw notably smaller volumes in activity at Luton, Milan and Rome airports. Whereas there was very strong growth, compared to three years ago, at the likes of Malaga, Mallorca and Cannes. Departure points with strong growth included Biggin Hill, business jet flights up by 87% vs same week in 2019. Flights from Ataturk, Istanbul, were up by 45% . The Phenom 300 and Challenger 300/350 ranked as two of the busiest jets this last week, with 30% more activity than three years ago. Global Express and Global 6000 flight activity was a third below the levels of this week in April 2019. 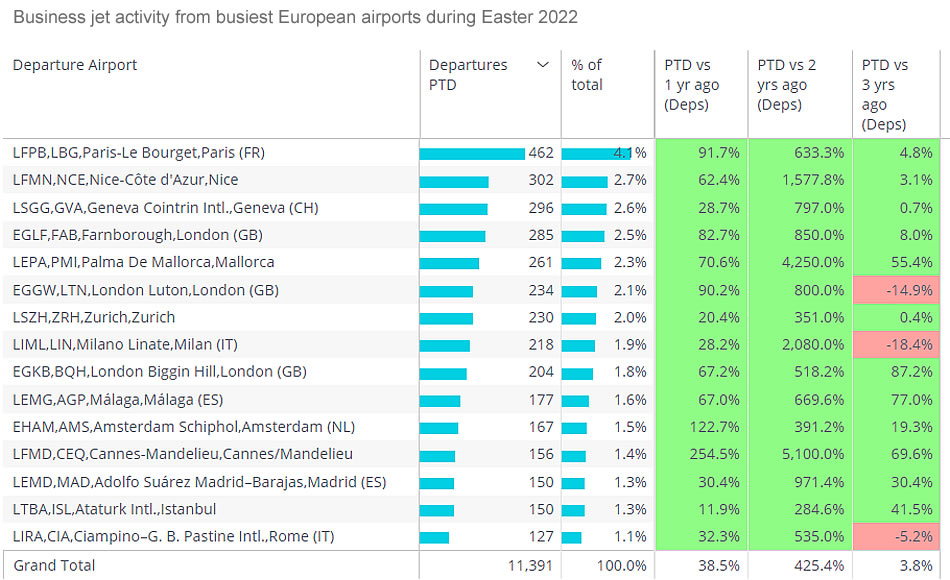 Business jet activity from busiest countries in Europe in April 2022

Aircraft activity in North America continues to recover from the previous few years, with scheduled airlines activity up 31% on last year, still 23% behind April 2019. Business jet activity continues to flourish, with 25% increase on last year, and up 19% on April 2019. Fractional operators are flying much more than pre-pandemic, almost 30% more sectors flown vs 3 years ago. Private and corporate flight departments are 20% busier and Charter operations are 17% busier. Florida has by far the strongest regional activity, with over 7,000 intra-state sectors flown so far in April, up by a remarkable 70% compared to April 2019. Business jet connections between Florida and Georgia and New Jersey are comparably record-breaking. Seven percent of the 23,000 departures from Florida this month were operated by Citation Excel/XLS, this fleet flying 59% more sectors than in April three years ago.

Of the three biggest markets in North America, only the US is ahead of comparative April 2019; Canada and Mexico have 21% and 34% deficits, respectively. Brazil, Australia, India, UAE and Nigeria are all seeing record high business jet activity in 2022.  As in Europe and the US, there is a stark contrast between stagnation in scheduled airline activity, rebound in business jet traffic. For example, the last week has seen a 60% bounce in business jet traffic in Singapore versus April 2019, whilst commercial airline sectors are ailing by 40%. The covid lockdowns in China have all but stalled aviation activity from major airports, with just 80 business jet sectors recorded in the last week, 75% fewer than April 2021. 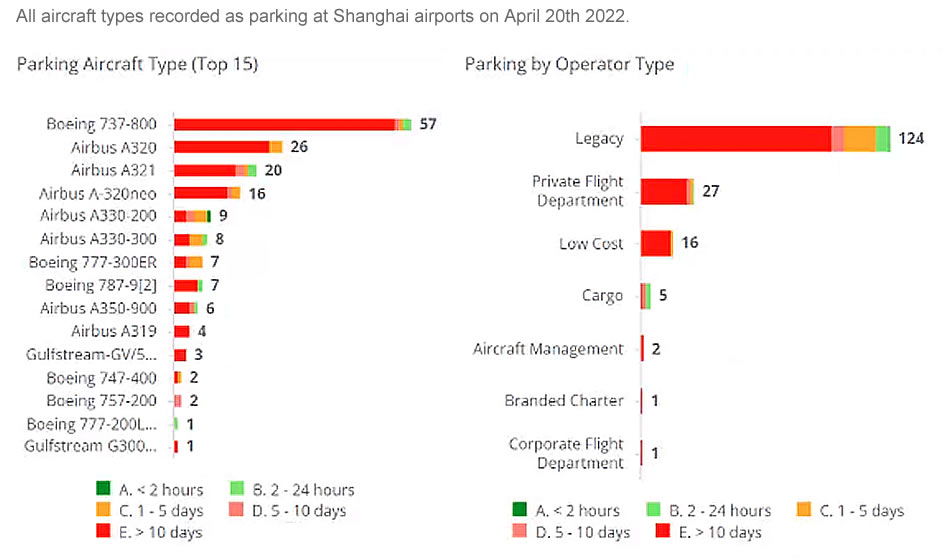