A fourth consecutive double-digit jump in 2022 in monthly global business aviation activity, demonstrating the resilience of the rebound in the post-covid customer base. Demand has tapered slightly in the US, mainly in the charter market, which may be hitting capacity limits. This year’s comeback in Private and Corporate flight activity is maintaining the overall positive momentum.

Global business jet sectors, 500,000 operated worldwide in April, were up 16% compared to April 2019, also reflecting a growth of 281% in operations compared to April 2020, the low point during the pandemic. Back then, the average daily activity was under 2,000 sectors worldwide. Since midway through last year the average has increased steadily within the traditional seasonal pattern, with March and April 2022 seeing the highest ever daily operations, around 11,000 sectors per day. As economic headwinds build, there may already be signs of tapering, with the last week of April seeing comparative growth of 11% versus 3 years ago, down on the monthly trend. Business jet travel is still outstripping scheduled airline sectors, which trended down by 53% this month compared to April 2019. 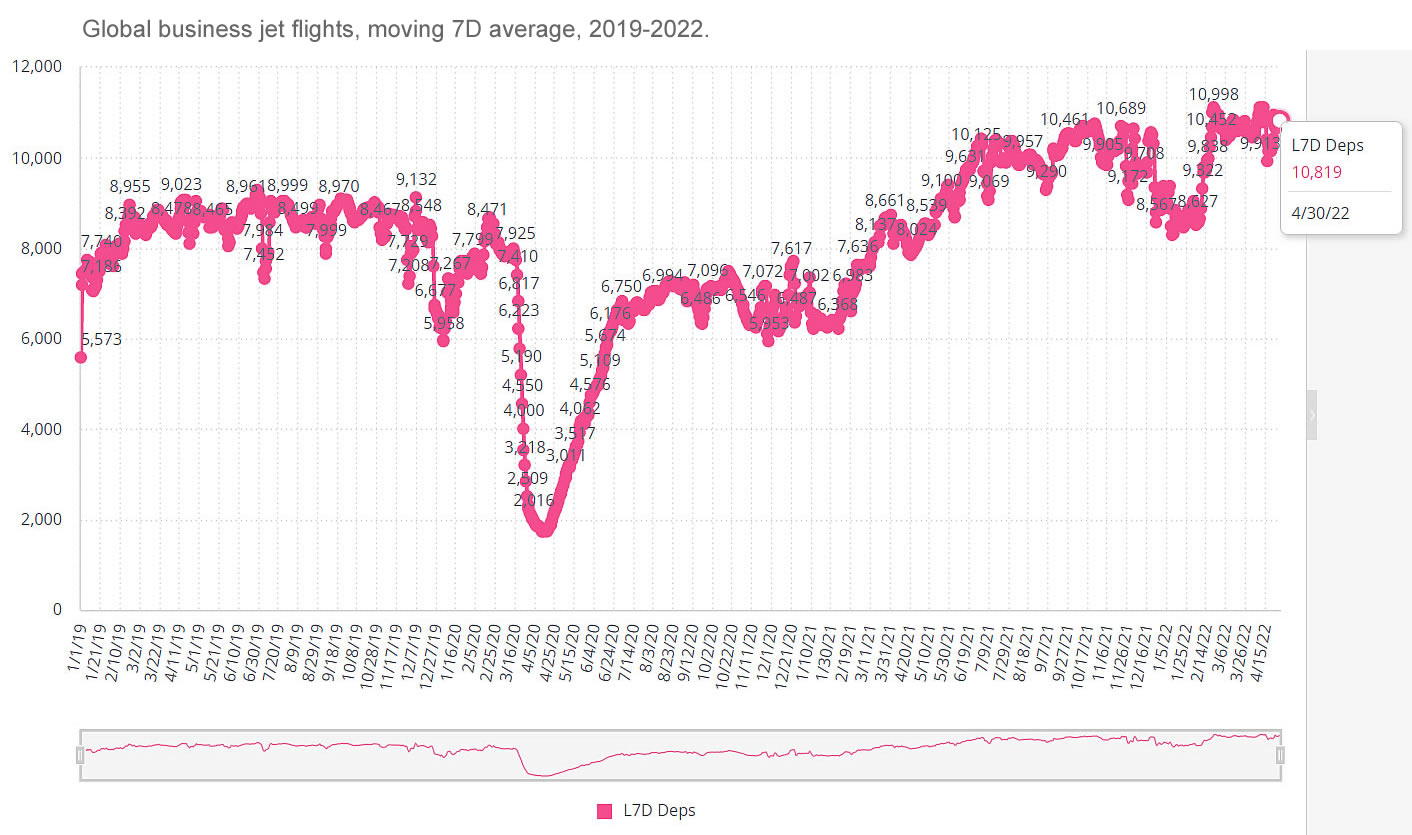 Business jet departures in the European region climbed to 60,000 in April 2022, up by 35%, 293% and 16% compared to 2021, 2020 and 2019 respectively. Despite the darkening macroeconomic outlook, growth in flight activity accelerated in the last week of April, up 22%. The UK is contributing a lot of the growth, doubling activity since April last year, and up 22% versus pre-pandemic April 2019. Germany had modest growth for the month, with a very strong final week; the first 3 weeks of April saw 5% decline vs April 2019, with the last week notching up a 29% increase. A big jump in connections between Berlin, Frankfurt, Stuttgart, Sylt and Zurich. Schonefeld and Friedrichshafen had more than double their normal volume of business jet departures.

Across the rest of Europe, April saw very strong growth in Italy, Spain, Netherlands and Belgium, all 4 countries seeing at least 30% more business jet sectors compared to April 2019. The South-East of Europe had even hotter demand, Greece smashing previous records with over 1,000 departures, up 58% on 3 years ago, Turkey sustaining a long-running increase in private jet activity, outbound flights up by 44%. Russia and Ukraine registered 899 business jet sectors during the month, down by 64% compared to April 2019. Only 3 months ago in January 2022, there were over 3,000 business jet flights in these 2 countries, a 41% increase versus January 2019.

Distribution of business jet activity in Europe in April 2022 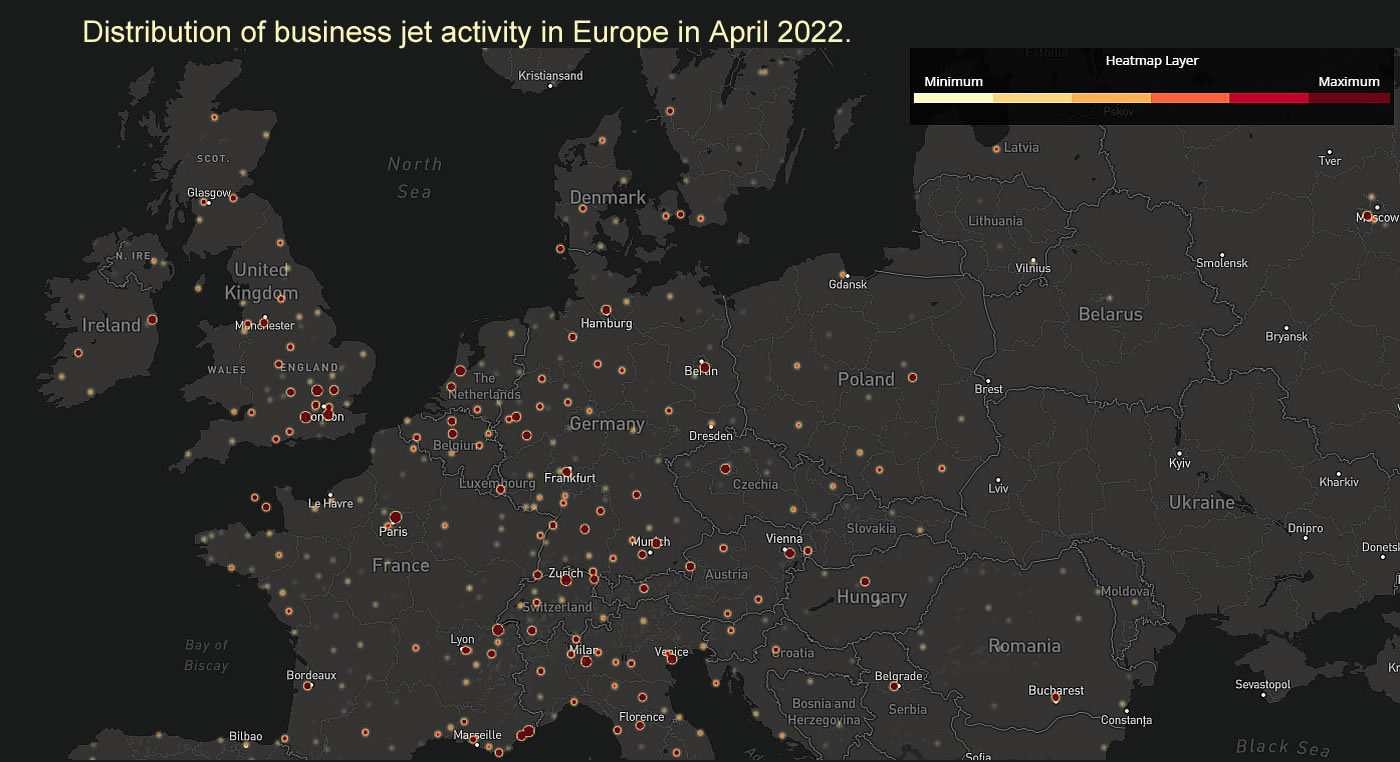 In North America, business jet and turboprop sectors were up by 13% during the month, compared to April 2019, and slowed to 7% growth in the last week. The picture improves without the prop fleet; jet sectors were up 22% for the month, 15% in the last 7 days. The shortfalls compared to 2019 are still evident in Canada, Mexico, also in Bermuda, Caymans. Record breaking business jet arrivals are still conspicuous in the Virgin Islands, Sint Maarten, Costa Rica, Puerto Rico. Within the US, Teterboro was the busiest airport, over 7,000 outbound bizjet sectors, up 3% on April 2019. West Palm Beach continues to beat records, flights up by 60% this month compared to 3 years ago. Flights between West Palm and Westchester were more than double the volume in April 2019. 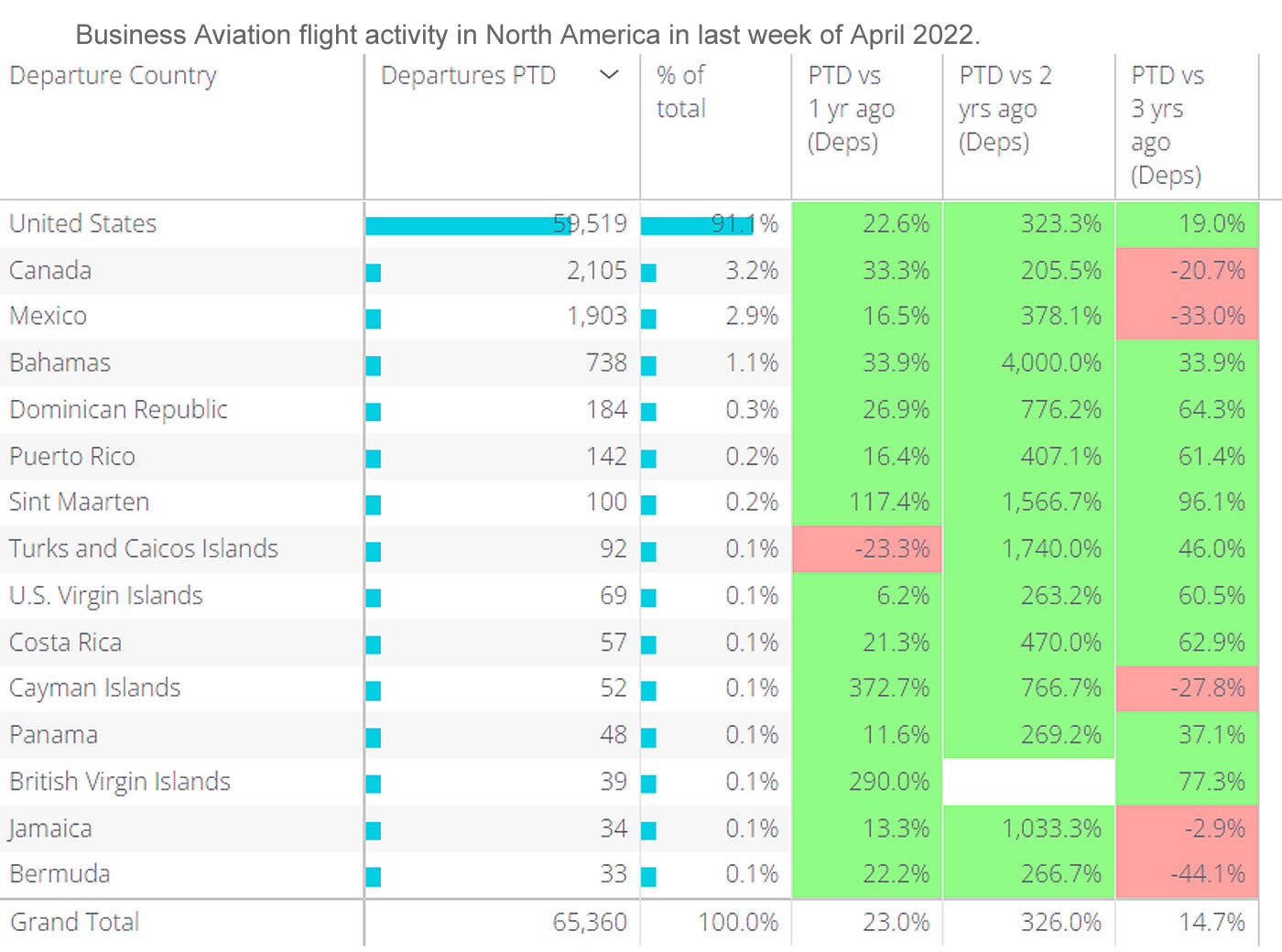 Business jet activity outside North America and Europe was very strong in April 2022, up 50% on April 2019. India, Colombia, Philippines, Nigeria, and South Africa all had more than double the activity of April 2019. Sao Paolo, Melbourne, and Al Maktoum were the three busiest airports, noting that the latter saw a dip in activity compared to last year April. The top international connections were between the US and Colombia, and Singapore and Indonesia. Business jet activity in China is crumbling as lockdowns continue, with departures down by 65% compared to last year, down 58% versus April 2019. Hong Kong and Beijing have seen the biggest drops this month. 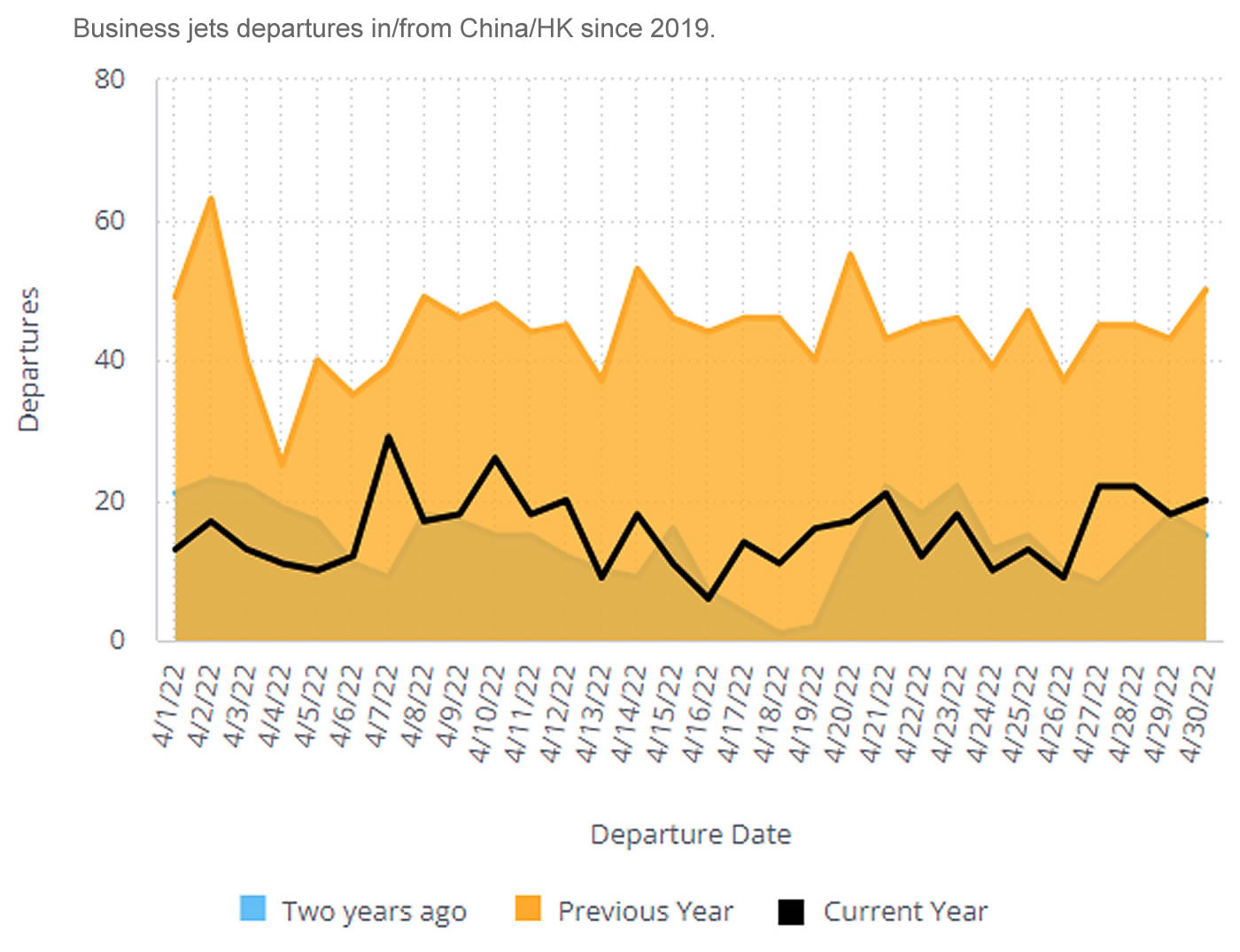