The long and record-breaking upswing in global business jet demand is coming to an end, most obviously in the key US hubs in Florida, California, Texas. In Europe, the second half of the month is slower than the start of summer, with Germany the weak spot. Bizjet demand in the UK is still hot, with a particular bounce in transatlantic connections with the US.

Business jets and turboprops have flown 2% fewer sectors so far this July compared to last year, although up 6% compared to pre-pandemic July 2019. In week 29, bizjet activity in North America was up 4% compared to the previous week, 5% up on last year. There were 204,000 departures in the last four weeks, down by 0.3% compared to comparable last year. Focussing on business jet activity in the United States, flights in the last four weeks are down versus last year, biggest dips in California and Florida, down 5% and 1% respectively. The largest uptick in flight hours this month have come from Ultra-Long-Range Jets and Very Light Jets, both segments seeing double digit growth this July compared to last year.

The seven top bizav States in the US have seen a marked drop in bizjet departures this month compared to July 2021. Through 24th July, bizjet activity in California, Florida and Texas is down 6%, 3% and 2% respectively compared to last year. Most regions of the US are still seeing more demand than pre-pandemic, New Jersey a notable exception. Some of the drop in US domestic travel may be due to more international flying. Departures from North America to Europe are up 67% compared to July 2021, 42% above July 2019. United States – United Kingdom is the busiest market, departures up 209% compared to July last year, 42% above three years ago.

Business jet demand in Europe has hit its usual seasonal highs, with fewer signs of slowdown than the US market; the wider European region has seen 12% more bizjet flights so far this month compared to July last year, 24% up on July three years ago. Events such as the Farnborough International Air show and French Grand Prix have seen strong bizjet demand this month. Fights into Le Castellet’s nearby airports were up by 37% compared to the same event back in 2019. Across Europe, the UK is sustaining the strongest growth compared to last year, bizjet demand still rebounding from Covid, and benefiting from US inbound visitors. Germany is showing the first signs of slowing demand in the EU, with week 29 activity down 10% on week 28, and flat year on year.

Bizjet arrivals into airports at the French Grand Prix, July 2022 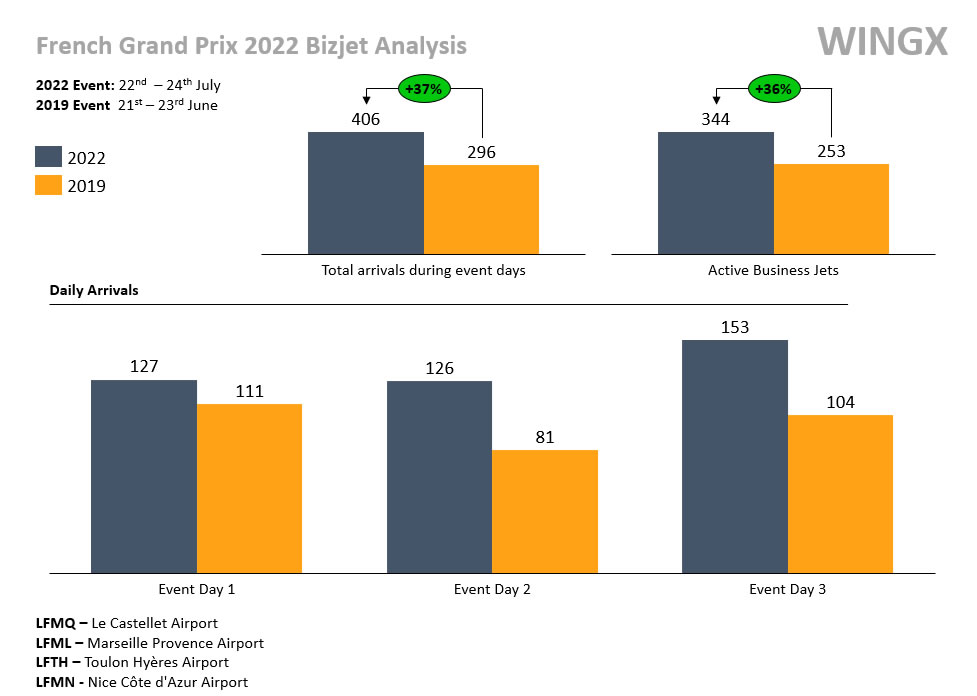 Outside Europe and North America, bizjet activity is up 12% this month compared to July last year, 58% more than three years ago. Demand is coming from private flight departments, departures up 27% compared to last year, double where they were three years ago. Demand in the Middle East region is still well above pre-pandemic levels (such as Ben Gurion airport: 56% more movements this month than in July 2019), but the trend is slowing week by week. Bizjet flights in Africa were up 15% in week 29 versus same week in 2021, ahead of the 7% 4-week YOY trend. Across Asia, bizjet flight activity is up 30% on July last year, with strong growth in India and Australasia. China is still showing below-par flight activity, 41% below last year, 20% off pre-pandemic July.