Business jet activity during Labor Day weekend was up on 2019 but slower than August last year, in line with a softening trend over the late summer. Europe is seeing a steeper drop in the last few weeks especially in central Europe. The current gain compared to 2019 is around 15% and we would expect that to ebb downwards towards parity during the rest of this year as various headwinds start to limit demand for business jets.

In the first 5 days of September there were 70,465 business jet and prop sectors operated globally, edging up by 0.1% compared to same dates in 2021, up 12.6% compared to same dates in 2019. In week 35, 28th August through 4th September, business jet flights were down by 1%. The seasonal peak is now past, with the 66,000 business jet sectors of week 35 comparing to the 52-week high of 78,000 business jet sectors in week 15 of this year. In Europe, in particular business jet activity is ebbing down compared to the fulsome demand in late-summer last year. Airline traffic is coming back, still 20% down at the aggregate level, this September versus September 2019, but for the top few airlines Southwest Airlines, American Airlines, Ryanair, Delta Airlines and United airlines, activity last month was within 3% of August 2019.

Business jet and turboprop activity in North America across all of August was 2% above August last year, 7% above three years ago. Business jet demand is starting to ebb compared to the unusually late-season spike last year, with week 35 down by 1% in the United States, down 5% in California. The Part 135 and 91K market is the softest market, with US sectors falling 9% in week 35 compared to 2021, California and Florida both seeing 10% dips.

Labor Day capped off the summer, and as with this year’s earlier summer breaks, business jet activity was up on 2019 but down a little on 2021. During the long weekend of 2nd-5th September, there were 22,427 business jet sectors operated, down 4% on holiday dates last year, up 7% on the same holiday in 2019. By comparison, airline traffic was up 2% on last year, but still down 10% compared to 2019. For business jet traffic, some pairs showed even stronger demand than last year – notably Teterboro-Martha’s Vineyard and Aspen-Dallas, but from hot spots like McCarran and Van Nuys, there was considerably less traffic than Labor Day weekend 2021.

Labor Day 2022 vs previous years for business jets and airlines

During the full month of August, business jet activity declined by 6% compared to August 2021, but still 18% ahead of August 2019. Declines appear to be steepening as we move into September, with 8% decline in week 35 ending 4th September. France, Germany and Switzerland are seeing the biggest falls in this most recent week, business jet movements down by over 10%. Le Bourget, Nice, Geneva, and especially Farnborough have seen a much slower start to September than last year. Some airports are still bucking the trend, with Biggin Hill, Luton, Milan Linate and Ataturk Istanbul all well up. Business jet movements at Amsterdam are up 15% this September compared to last year which is clearly linked to the Dutch Grand Prix; business jet activity at the event’s nearest airports was up 11% compared to the same event during 2021. 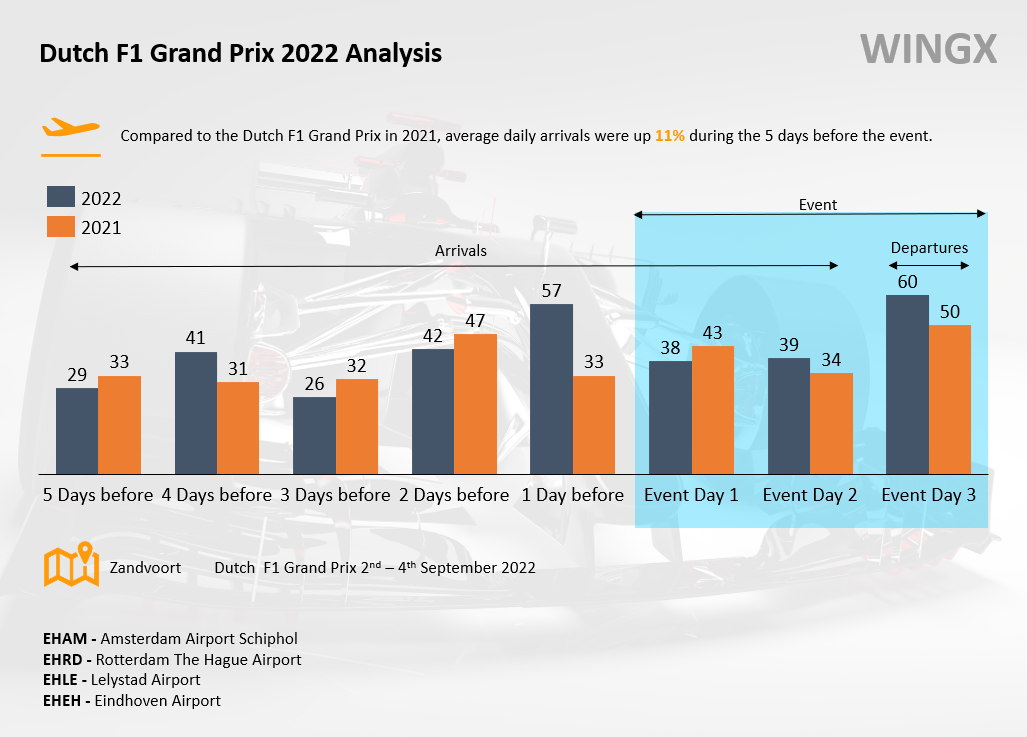 The rest of the world is still seeing some momentum, though slowing, in business jet traffic compared to 2021; the first 5 days of September were up by 7% compared to September last year. Sao Paulo is the busiest airport outside North America and Europe, and traffic is now trending down compared to last year. Seletar is still seeing a very strong rebound, flights up over 4 times compared to last year. Morocco and China have seen the biggest slowdowns this September, both close to 50% less busy than September 2019. At the regional level, week 35 2022 saw 2% more business jet demand in South America versus last year, with 10% growth in Africa and Middle East, and Asia coming back fastest, 17% more flights in week 35 2022 versus same week 2021.