Geopolitical instability, currency market turbulence and runaway inflation has undermined business and consumer confidence and in Europe this is feeding through to lower demand for business jet travel, well down on last year´s early Autumn peaks. In the US, the charter market continues to taper, but still holds at a higher level than in any period pre-pandemic.

So far this month business jets are flying 1% less than last year, 15% above three years ago. In week 42 ending 23rd October, activity across the region was on par with same week last year, also level with week 41 this year. In the last four weeks business jet sectors are trending at 1% below the same period last year. Light jet is the busiest segment across the region this October, although this activity is down 5% compared to last year. Super Midsize, Super Light, Ultra Long Range and Very Light Jets are flying more than last year, whilst Light, Heavy, Midsize, Entry Level and Bizliners are flying less.

The US Grand Prix at the Circuit of The Americas on 20-21 October reportedly drew the biggest ever F1 spectator crowd. For those arriving by business jet, there was notable activity at nearby airports (KAUS, KEDC, KSAT, KRYW, KHYI). Compared to the 2019 US Grand Prix, average bizjet arrivals during the 5 days prior to the event was up 37%. During this year’s Grand Prix event there were 538 active aircraft, 74% more than at the 2019 event. In Orlando NBAA-BACE caused a spike in business jet arrivals at Orlando airports compared to normal activity levels. During the conference there were 406 active business jets at nearby airports, 4% more than the 2019 event in Las Vegas. 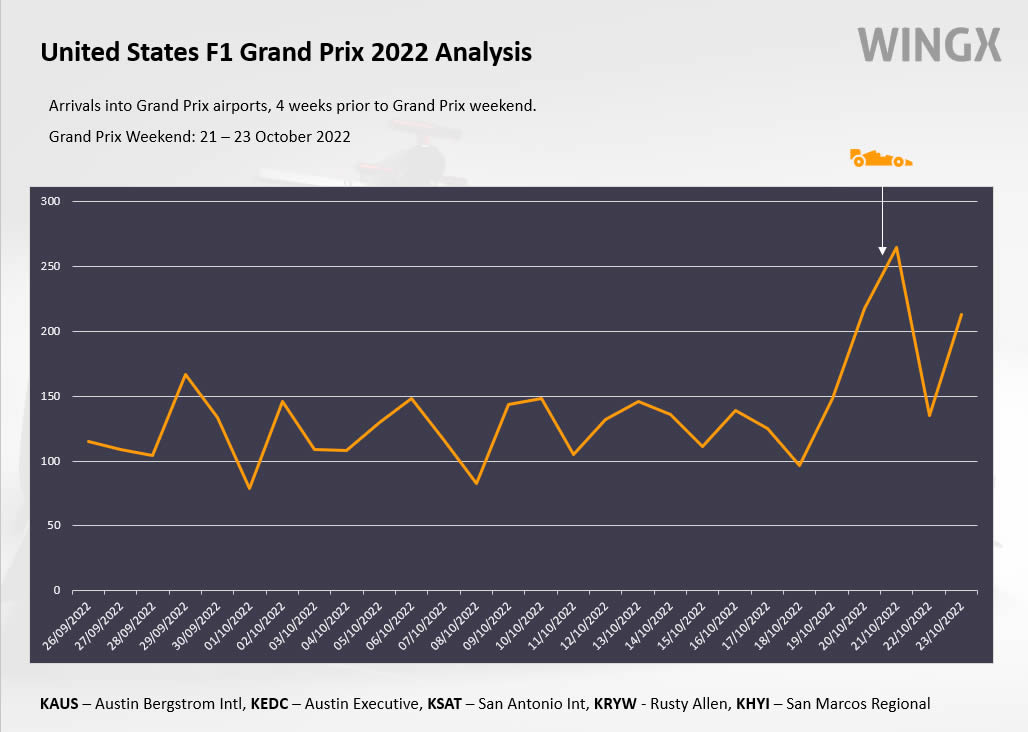