Northern Helicopter GmbH will fly in the Arctic and Antarctic in the future. The shipping company F.Laeisz G.m.b.H., based in Rostock, Germany, has entrusted the Emden offshore aviation company with the operation of helicopters for the research vessel "Polarstern" chartered to the Alfred Wegener Institute, Helmholtz Center for Polar and Marine Research (AWI) from June 2022. 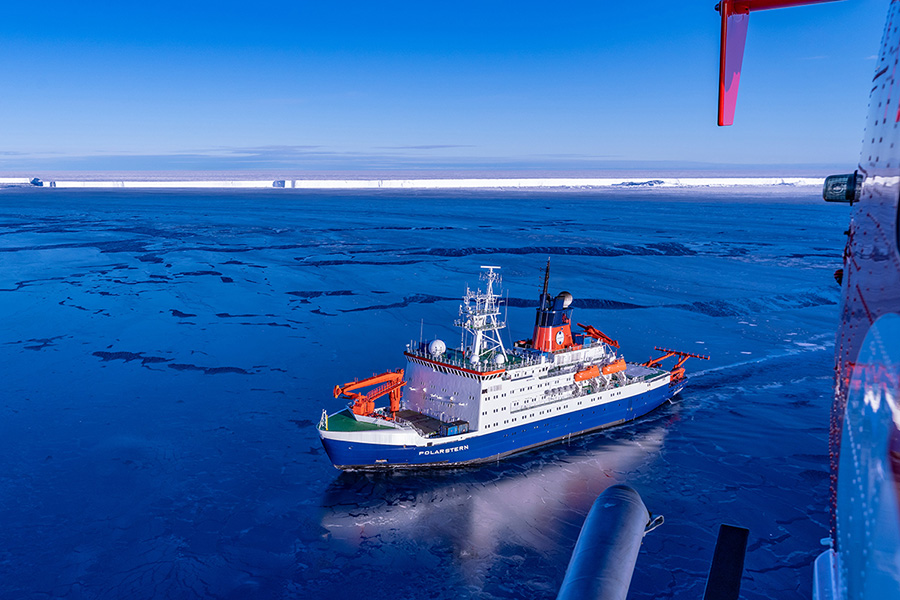 For the expeditions to arctic and antarctic regions, NHC Northern Helicopter will provide the flight crew and ensure the airworthiness of the required machines. For the maintenance and technical operation of the aircraft during the expedition, NHC Northern Helicopter has commissioned the maintenance company of its shareholder, DRF Stiftung Luftrettung gemeinnützige AG in Rheinmünster, Germany. The contract begins in June 2022 and runs for three years with an option to extend for a further two years.

“The assignment is a great recognition of our high-quality and committed work in recent years. Entry into the 'research aviation' segment is another important step in the development of our company. We look forward to a long-term partnership with the shipping company and the AWI,” said Armin Ortmann, Managing Director of Northern Helicopter GmbH.

After the laytime in Germany’s Bremerhaven shipyard, the “Polarstern” vessel will set sail again at the end of June 2022. Traditionally, the research icebreaker goes on expeditions to the Arctic in the summer months and to the Antarctic from November to March. The tasks of the helicopter crew during the individual research projects can vary. For example, the helicopters enable the scientists to cover a large area with regards to taking ice thickness measurements. During these measurements, the measuring device hovers over the ice as an external load of the helicopter. During supply flights to Neumayer Station III, which is inhabited all year round, the helicopters also transport sensitive equipment that has to be brought from the ship to the station without vibration. And, of course, they are always there when people need to be transported quickly to the ship.

“During the tender process, Northern Helicopter GmbH’s competence and commitment were very convincing. We look forward to a professional collaboration in the service of science in the remote polar regions,” expressed Michael Thurmann, head of the research fleet at F.Laeisz G.m.b.H.

Missions in the cold, fog and darkness, such as those required on the “Polarstern” expedition, are part of everyday life for the pilots of NHC Northern Helicopter. They are on high alert 24 hours a day, 365 days a year, at the stations in St. Peter-Ording, Germany, and at the station in Güttin (on the island of Rügen, Germany) for medical emergencies both at sea and along the coast. The often challenging weather conditions in the North Sea place a lot of demands on the crews of the offshore rescue helicopters. Regular training under real conditions qualify them for these requirements and for the upcoming "Polarstern" expeditions. “Before the research ship leaves the port, the pilots are given additional training and preparation for the extreme conditions in the polar regions, such as 24-hour nights in the Arctic winter or the bright, glaring light of the Antarctic summer,” explained Lars Vaupel, pilot and head of the “Polarstern” project NHC Northern Helicopters. Vaupel has already accompanied 22 previous Arctic and Antarctic missions and achieved over 700 flight hours in the polar region alone. For him, the upcoming polar expeditions are a kind of homecoming.

For the maintenance of the helicopters, technicians from the Operation Center of DRF Luftrettung will accompany the expedition. The shipyard in Rheinmünster near Karlsruhe is a recognized training company. On site, the round about 130 technicians have a total of 15 workshop areas (docks) and adjacent workshops for the repair of components such as engines or avionics. The base's fifteen docks include eleven that are designated for helicopter maintenance, two docks for helicopter training as well as distribution, and two docks for Learjet maintenance. Furthermore, mobile maintenance teams are deployed for minor checks, maintenance or short-term malfunctions on the helicopters and aircraft. As a result, this ensures the best possible operational readiness of the helicopters at the individual air rescue bases of the DRF Luftrettung and their ambulance aircraft. The maintenance company carries out around 2,500 maintenance orders annually, including maintenance for corporate customers. The experts for the BK 117C1, the helicopter type used on the “Polarstern” expeditions, also work at the shipyard. Northern Helicopter GmbH also has its BK fleet regularly serviced in the Operation Center.