Business aviation aircraft have mustered just under 60,000 sectors so far in February 2021 - 11% less activity than in February 2020 - according to WINGX`s weekly Global Market Tracker

Business aviation aircraft have mustered just under 60,000 sectors so far in February 2021 - 11% less activity than in February 2020 - according to WINGX`s weekly Global Market Tracker. Asia and Oceanic regions are seeing some year-on-year gains as they pass the anniversary of the first travel disruptions from the pandemic. Business aircraft in South America and Africa are flying more than they did last February, with fleets deployed on hybrid shuttle routes on logistics, cargo and military operations. 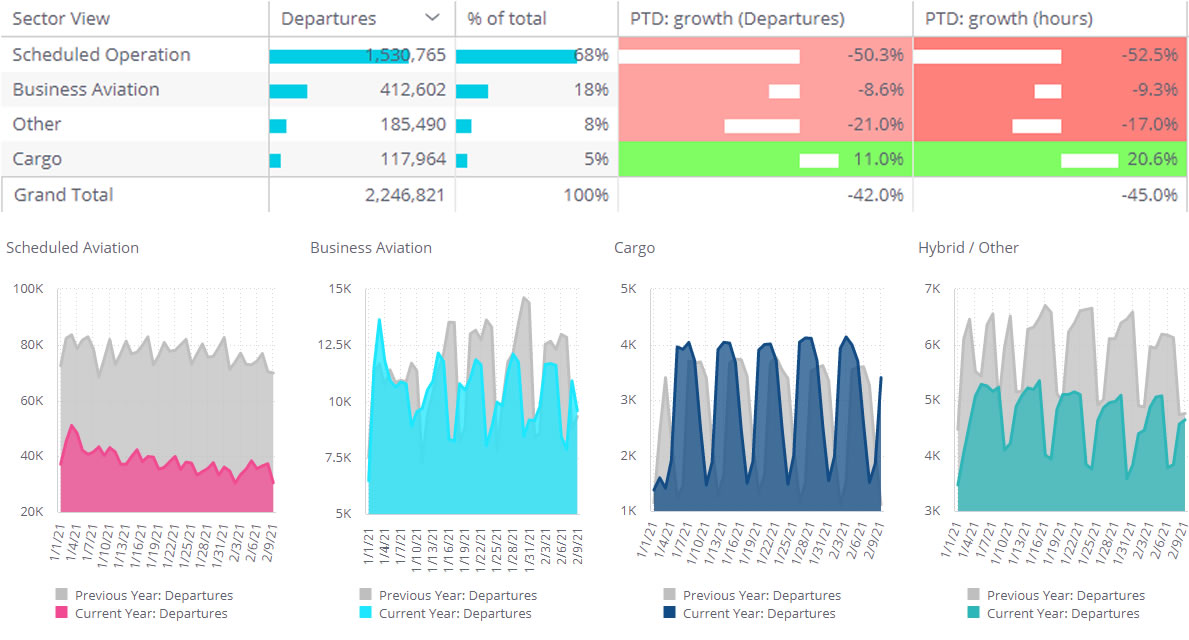 In the US, still by far the largest regional market, activity is holding up within 10% of normal. Europe’s ever-varying border restrictions have clearly stifled demand, activity trending 30% below par. Scheduled airline activity in Europe is more than 70% below the same period in 2020.

February normally sees a significant spike in business jet activity in the US around the annual Super Bowl weekend. This year’s event at Tampa had strict limitations on stadium spectators, far removed from the normal razzmatazz. Unsurprisingly, peak day activity was down 60% YOY and the Friday to Monday period was down 52% in arrivals. Even so, the three main airports, Tampa, Peter Knight and Clearwater, saw a 40% pick up in traffic compared to activity levels in the rest of the month. Last year, 80% of visitors arrived at the event from outside the State, with 250 international arrivals, 100 arriving in large jets. This year more than half the arrivals came from other parts of Florida, only 20% in large jets, and fewer than 10 international arrivals.

Despite the quiet Super Bowl event, Florida is still thriving in business aviation activity, with branded charter operations up 10% this month compared to February last year. Turboprop and business jet movements in Texas and Colorado are also trending up this month. Activity in New York, Georgia, Arizona, and Michigan is pretty close to normal. But California has gone into reverse; normally the busiest US State is now ranking 3rd and activity trending down by 22% compared to February 2020. Short sectors in light aircraft are driving the nationwide resilience in demand, with over 10,000 sectors flown in Very Light Jets so far this month, up by 11% YOY. Heavy Jet traffic is down well over 20%. Charter operations are the most resilient, with year-to-date charter hours trending only 1% down. 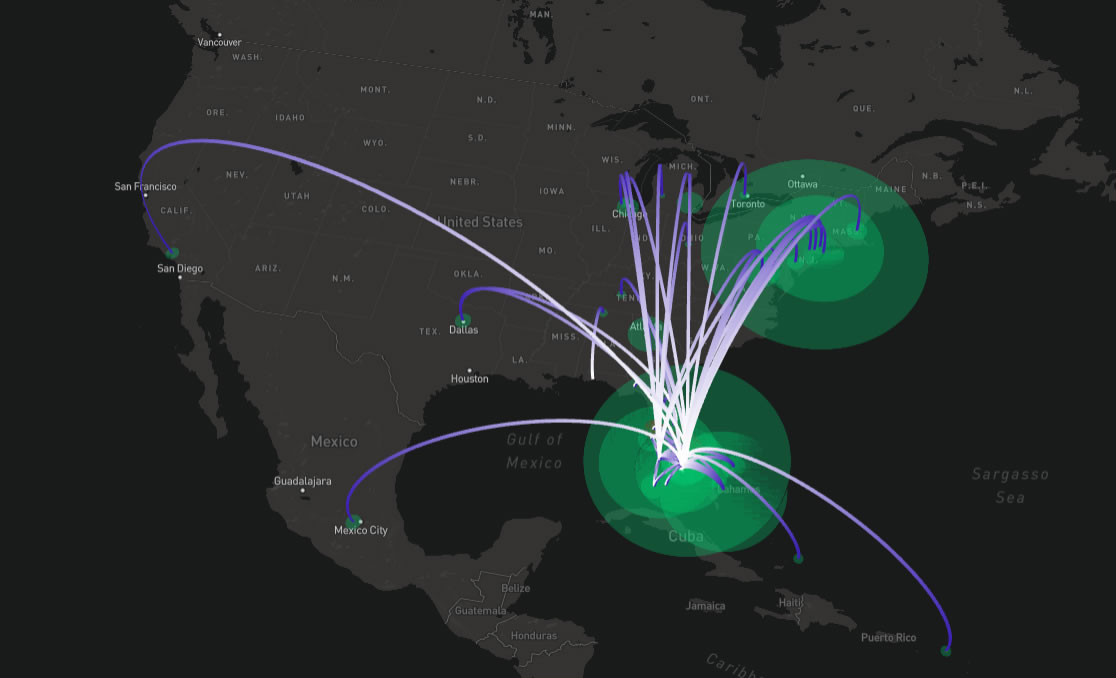 In Europe, the recovery in business aviation has clearly faltered in 2021. Year-to-date, jet and prop activity is down by 30%, worse than the 26% deterioration since April 2020. Having recovered to a peak of 1,760 flights a day back in August last year, the current 7-day trend is well under 1,000 daily sectors, back to levels in June last year. Increasingly stringent lockdown measures have shut off demand this month, with fractional and private flights down by half, the charter market down by a quarter. The UK is worst affected, with a drop of more than 60% in business jet operations so far in February 2021 vs February 2020. Business aviation traffic from France and Germany is down by a third, with traffic in Spain falling 20%. Flights from airports in Russia, Turkey, Ukraine and Cyprus are up year-on-year, with departures from Ataturk up by 25%.

The absence of the European ski season has contributed to a 40% drop in business aviation flights to and from Austria and Switzerland. The cancellation of this year’s World Economic Forum, which normally attracts a hive of business jet activity, prompted an 80% drop in arrivals to Zurich, Duebendorf, Altenrhein, St. Moritz airports over the same period. At last year’s event, there were 80 international arrivals by business jet from the US, this year none. Notably there were as many Piston flights this year as last year. 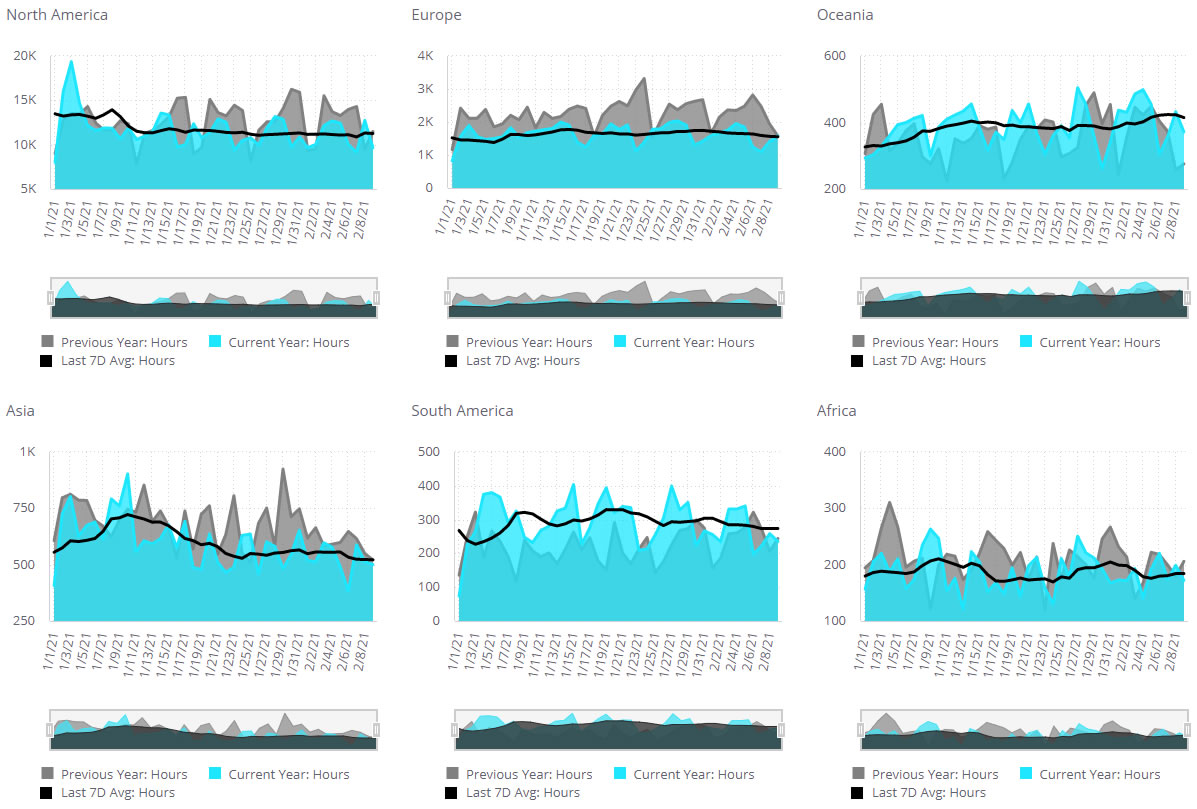 In contrast, growth in business jet traffic in Turkey and Russia is coming from heavy and long-range jets, with Embraer Legacy 600 activity up 16% this month, Challenger 850 activity up 30% compared to February 2020. The most popular growth pairs flown from Russia are going from Vnukovo to Sochi, Riga and Al Maktoum, Dubai.

Managing Director Richard Koe comments: “Regional trends in scheduled airline traffic are fairly consistent, with all but Asia seeing more than 50% declines this month, whereas business aviation activity trends are widely diverging. The European market is floundering, particularly Western Europe, but the US market is stabilising at around 10% below normal. Then there is further variance within the US, California stalling whereas business aviation is still thriving."