Business jet activity is holding up, losing some ground to last year’s record January activity, when the end of lockdowns released a surge of pent-up demand. Transatlantic flight activity is still growing. The US charter market has come off last year’s highs but is still much bigger than pre-pandemic. Regions like the Middle East are still seeing record business jet flight activity.

Sixteen days into January 2023 and business jet and turboprop sectors are 3% ahead of the same 16-day period in 2022, 16% ahead of 2019. Focusing on just business jets, sectors are 1% ahead of last year, 20% ahead of 2019. Between January 16th 2022-2023 there were 3.7 million bizjet sectors flown, 11% more than the previous 12 months, Jan-21 to Jan-22. Between January 16th 2022-2023 there were 1.8 million turboprop sectors, 7% more than the previous 12-month period. Global scheduled airline sectors are up 21% compared to January last year, 11% down on 2019. Looking at the world’s busiest airlines (Southwest Airlines, American Airlines, Delta Airlines, Ryanair, United Airlines), passenger airline activity is up 20% compared to last year, 3% higher than January 2019. Freighter activity has dropped off compared to last year, sectors down 5%, activity is almost on par with January 2019. 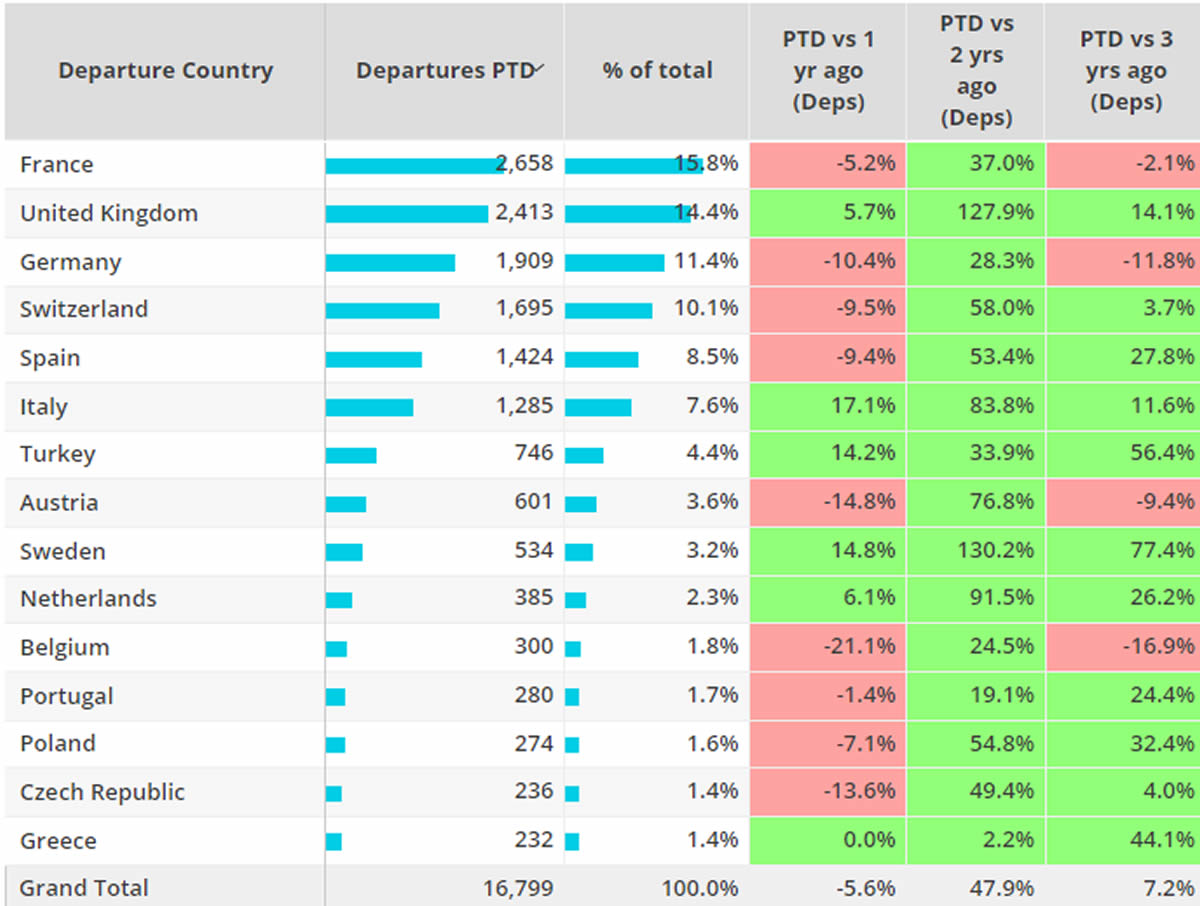 Davos hosts the World Economic Forum this week (January 16th – 20th), the event opening on the 16th of January. Business jet arrivals into nearby airports (LSZS, LSZH, LSMD, LSZR) on the day before the 2023 event were down 40% compared to the 2019 event, although up 32% compared to the opening day in 2019. Overall business jet arrivals are down 10% compared to the same 2 day period during the 2019 event. There were 200 active bizjet aircraft during the day prior and day 1 of this years event, 7% fewer than the same period in 2019. The top airport pair in the 2-day event period this year is Luton – St Gallen Altenrhein, followed by Luton – Zurich.